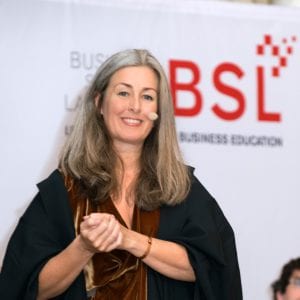 Polly Higgins, Founder of the ECOCIDE initiative, received the Honorary Degree of BSL in 2013 in recognition of her visionary international legal breakthrough for the environment.

Polly Higgins is a barrister, author and international environmental lawyer, who advocates a different approach to preventing the destruction of our planet. Already in her first position as a barrister at Bridewell Chambers, Polly Higgins showed a deep interest in Employment Law and in particular all aspects of discrimination, whistle-blowing, unfair dismissal, etc. Ms. Higgins’ interests and concerns went beyond fair employment; she also engaged herself in more sustainable sources of energy production. In 2006, she was a founding member of DESERTEC, an EU legislative and political framework for the advancement of concentrating solar power.

And as if fair employment and sustainable energy were not enough, in March 2010, Polly Higgins proposed to the United Nations that Ecocide be the 5th Crime against Peace. Ecocide is the extensive damage to, destruction of or loss of ecosystem(s) of a given territory, whether by human agency or by other causes, to such an extent that peaceful enjoyment by the inhabitants of that territory has been or will be severely diminished.

A big impact is expected from this initiative in the next years. In 2011, her first book “Eradicating Ecocide: Laws and Governance to Prevent the Destruction of our Planet” was awarded the People’s Book Prize for non-fiction. Currently, Polly Higgins is CEO of Earth Community Trust, and Arne Naess Chair 2013-14 in Global Justice and the Environment at the University of Oslo. Polly Higgins has received several awards, and we can name but only a few: