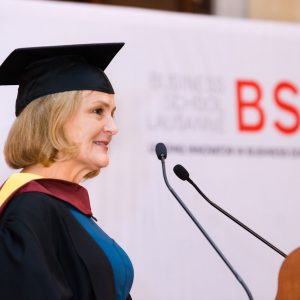 Having grown up in apartheid South Africa, Kate’s world view is defined by having witnessed the creation of its new way of life. Awed by the leadership of Nelson Mandela and Archbishop Desmond Tutu, Kate believes in the limitless possibilities a sense of shared humanity can create. One Young World is Kate’s idea. Inspired by her love for the Olympic movement and its values, One Young World should, in Kate’s vision, give young leaders a chance to meet their counterparts from every country in the world and resolve to make the world a better place.

Kate delivered a commencement speech to the 2014 graduating class of BSL during the school’s annual Graduation Ceremony held on 20th September 2014 at the Beau Rivage Palace in Lausanne:

Following the ceremony, Kate gave a brief interview for BSL where she shared her impressions about the school and gave her reasons for being optimistic about the new generation of emerging leaders.

Kate about the emerging new leaders in the world: