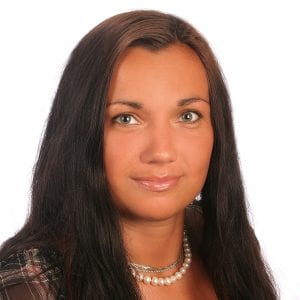 Professor Dr. Leonila Guglya teaches Business and Corporate Law at the BBA level at BSL since 2012. She has an extensive academic and practical background in international law domain, focusing on international trade law, international business law and international dispute settlement.

After starting her legal career as an in-house counsel in Ukraine in 2001, at varied periods in time she has worked with several international law firms in Ukraine, Belgium and France, was acting as a research associate for the international investment arbitration project at the University of Geneva, was a visiting researcher and, later, a doctoral fellow at the WTO, and had a wide range of academic engagements, predominantly in Hungary and Switzerland. She joined IDEAS Centre, a Geneva-based trade-related “do-tank”, in 2018 as a Policy Advisor, in which capacity she provides trade policy advice and technical assistance to developing and least developed countries in WTO accession negotiations, post-accession process, DDA negotiations (agriculture, fisheries subsidies and SDT) as well as in the negotiations on the “new” issues (e-commerce, investment facilitation, and MSMEs).

Back to Our Faculty