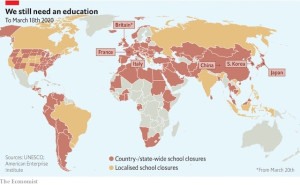 It is worth taking a step back and asking three important questions:

The short answer to the first question is that SARS-CoV-2 got a bit of help from an incomparably more powerful force, our own socio-economic system, more specifically the excessive and growing global integration and travel, and the exploitation of animals. Our collective resilience was further reduced by inequality and exclusion, both accelerating propagation. The result: three deadly outbreaks in just 17 years: SARS (2002-3), MERS (2012), and COVID19 (2019-…).

SARS-CoV-2, the virus causing COVID-19, is part of a large family of coronaviruses, originating in animals, like SARS-CoV and MERS-CoV. It needs an intermediate animal to “jump” from bats to humans, and spreads slowly, from human to human, one at a time, mostly within a very short distance (1 m), floating just minutes in airborne droplets and mostly dying within hours on solid surfaces (more on cdc.gov).

How can a relatively well understood, infectious but slowly propagating pathogen become a global pandemic in only a few weeks, under the watchful eyes of scientists, health officials and governments, in spite of the heroic engagement of doctors and nurses? It is already causing untold human suffering, and requiring the most drastic restrictions to avoid claiming millions of victims.

Globalization and excessive travel: the increase in travel is making the world much less sustainable (CO2, pollution, road accidents, habitat destruction to build roads) and less resilient at the same time. Air travel alone increased almost three-fold worldwide (1.6bn to 4.4bn) between 2002 and 2019, 8-fold in China (83m to 660m), more on data.worldbank.org. For comparison, the Black Death, a more deadly and infectious disease, infected Europe in 7 years (peaking in 1347-1351), in a population much weakened by famine, with no understanding of immunology or any organized attempt to stop infections.

Today’s disease propagation in Europe is about 100 times faster – in spite of all knowledge, awareness, and efforts by dedicated and competent health authorities, and of course a well-fed population, Europe reached a “beyond containment” stage in less than 3 weeks. Data on new infections show European countries following Italy by 6-16 days, more on nrg.cs.ucl.ac.uk/mjh/covid19.

Animals: billions of stressed, unhealthy, exploited animals in close proximity to humans significantly facilitate transmission. Living in harmony with a small number of healthy domestic animals, with the wild populations undisturbed, would have almost certainly prevented all recent coronaviruses.

Inequality and exclusion: poorly nourished, unhealthy people living in cramped conditions are much more likely to catch and transmit the virus, especially if the inability to take sick leave means they continue working.

We have analyzed how and why a relatively harmless pathogen, from a broad historical perspective, has completely overwhelmed all progress in human knowledge, technology, institutions, and dedication of health professionals – spreading the pandemic around the globe in less than two months. Current drastic social distancing is a necessary short-term action. Let’s use this case as final wake-up call, as the next one could be much worse.

Was it worth creating this system with so many dangerous side-effects? Thomas Piketty writes in “Capital and Ideology”, just published, that “what made economic development and human progress possible was the struggle for equality and education and not the sanctification of property, stability, or inequality”. An optimal, low level of globalization helps share knowledge and human understanding, and increases resilience. Past this point, consequences of further globalization create suffering for most life, human or not. The same could be said for energy or resource use, or indeed most aspects of our society.

It is time to replace social distancing with distancing from consumerism, material growth, individualism, fossil fuels, excessive travel, industrial food and all the other things making us miserable – and start building a new society.