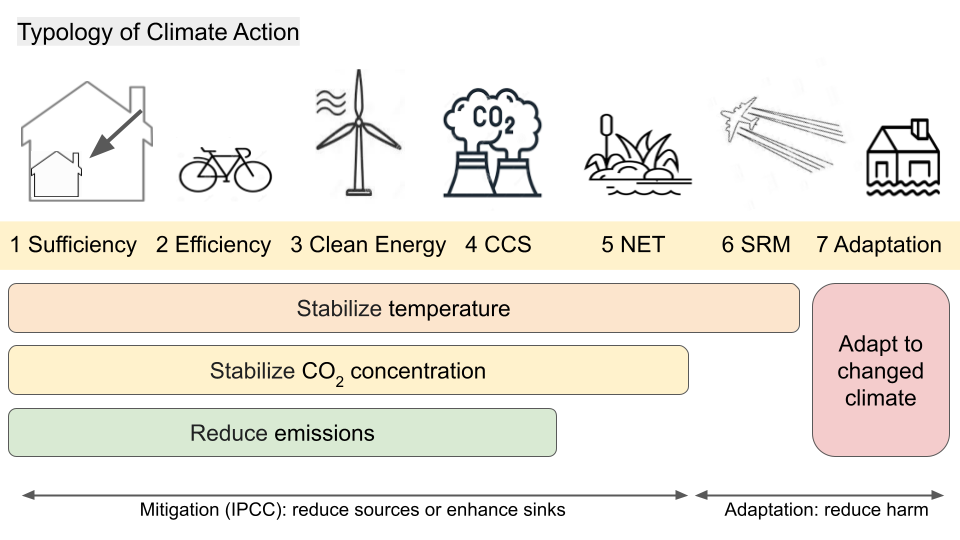 IPCC’s Assessment Report 6, Working Group 1, estimates the remaining 1.5°C-compatible carbon budget at around 400 Gt CO2, meaning that to avoid the worst impacts of the climate crisis, the World needs to reduce emissions by half by 2030 latest. As the main emissions sources are fossil fuels and industrial agriculture, these activities will require similar reductions.

Effective climate action, as analyzed in Carbon removal, net zero, and implications for Switzerland, comprises sufficiency, efficiency, and clean energy, together account for at least 90% of needed reductions, with Carbon Capture and Storage (CCS) and Negative Emissions Technologies (NET) together removing a maximum of 10% of the remaining emissions.

Sufficiency, or reducing the activity level such as distance traveled, size of one’s residence, or quantity of consumption, is the climate action lever with the highest potential, which can also be implemented fastest, and with the lowest investment. However, it requires changing behavior, and more importantly, how people think about wellbeing, and is almost completely missing from “official” climate plans in any country, including in Switzerland at the communal, cantonal, or the federal level. In contrast, efficiency and clean energy, while essential, have a much more limited potential, and require more time and investment. In an ideal world, the three actions would be balanced, with an emphasis on sufficiency in the critical decade ahead of us.

Given this importance, how could we get closer to this ideal world, and improve the general acceptance of sufficiency measures? Can deliberative democracy help, and if so, how?

Deliberative democracy is best known from citizens’ assemblies, consisting of a group of citizens selected to represent the population in terms of age, sex, education, and other parameters. Participants first learn about their topic, and then take the required time to deliberate and develop a series of proposals, on which they vote anonymously in the final phase, producing the final recommendations of the citizens’ assembly. Such assemblies have been successfully conducted dozens of times since the 1980s, their recommendations combining expert understanding with a broad inclusion of citizens’ concerns.

In our own contribution, we conducted an Academic Citizens’ Assembly during the K3 Kongress zu Klimakommunikation 2022, at the Tony Areal in Zurich, on Wednesday 14.09.2022. Our group of 21 conference participants, all knowledgeable on climate issues, started deliberating after a short introduction on sufficiency. The assembly was remarkably successful, producing a total of 29 proposals, of which 12 reached an acceptance level in the final voting between 85% and 100%. The topic of the assembly was “How to make sufficiency central to the national climate strategy?”.

Results are detailed in the ACA K3 2022 Report; here we show the top proposals exceeding 85% support, translated from German and slightly edited for clarity:

What can we conclude from the ACA K3 2022, while keeping in mind the non-representativity of our expert participants? And even if representative, sufficiency at a useful scale for society would require millions of people to rethink their perspective of wellbeing and start changing habits – would any citizens’ assembly be useful for our real-life issue?

The first question is easier to answer, as dozens of successful assemblies systematically show that groups of non-expert citizens rapidly learn enough to make informed decisions about complex topics. The second question is trickier, as past assemblies often failed to transfer their thinking to the broader society, which has not benefited from the same learning and deliberation as the assembly. To solve this major limitation, we have developed the Academic Citizens’ Assembly, which scales to any size using technology, potentially involving millions of people in the learning, deliberation and voting. Participants would work in groups of around 10 people around a real table, with a facilitator, with many such groups, potentially many thousand, collaborating electronically.

At a small scale, we have tested the assembly three times successfully, each time reaching very high convergence levels, and truly interesting proposals. The IT tools we use are open source, proven to be highly scalable. Still, to prove our whole concept as sufficiently scalable and suitable for the wicked problems challenging today’s society, we are looking for communes to run a full-scale assembly, at the same time producing a high-quality decision on a contested and complex topic they are facing. Any suggestion, contact, or help is welcome – please join us.