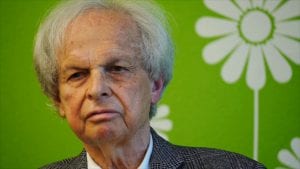 We would like to share our deepest condolences with the family of Prof. Dr. Hans Christoph Binswanger and with our colleagues of the Institute for Economy and the Environment of the University of St. Gallen.

Hans Christoph Binswanger was a co-founder of IWÖ (Institut für Wirtschaft und Ökologie – Institute for Economy and the Environment) with which we have been running our Diploma in Sustainable Business since 2011.

We will always remember him for the major role he played in the increasing awareness we can see around the burning sustainability issues we are now facing.

From 1969 to 1994, he was professor of Economics at the University of St. Gallen and headed the new founded Institute for Economy and the Environment from 1992 to 1995.

Beside many fields of interest, ranging from the theory of money to European integration or even literature, his main interest in research since the 1960’s was the relation between Economy and Ecology. While he was not in favor of a zero growth, he supported the idea of a reduced growth and suggested that a required global growth of 1.8 % would suffice. He was in favor of cooperatives and foundations as business models, rather than joint-stock companies, because these alternative forms reduced growth dynamics.

Hans Christoph also promoted a tax reform, where nature is a “social partner” in the economic value creation. He was a member of the advisory board of the Forum Ökologisch-Soziale Marktwirtschaft in Berlin, a think tank promoting and developing environmental taxes, where he collaborated with Prof. Dr. Ernst Ulrich von Weizsäcker, the co-founder of Club of Rom.

Both his teaching and his numerous publications in German made him a renowned and appreciated thought leader of sustainable business in the German-speaking area and a pioneer of a more responsible approach to business far beyond the language boundaries. We bow deeply in appreciation of his invaluable contribution for a better world and dearly honor his legacy in our research and teaching.