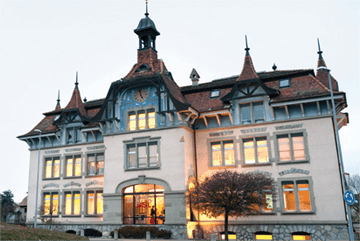 Lausanne, Switzerland – 25 June 2010 – Business School Lausanne (BSL) announced today their move from their Lausanne downtown campus at Avenue Dapples to an historic landmark building in the southwestern part of the Greater Lausanne Area. BSL will move in August in preparation for classes starting in September 2010 in their new premises.

BSL’s new campus is located in an area known for its continuous development in higher education. BSL’s move from its downtown location to the spacious new landmark site follows developments such as the Rolex Learning Center by EPFL (Swiss Federal Institute of Technology) and the new campus of IDHEAP (Swiss Graduate School of Public Administration) inaugurated in 2010. With additional student restaurant and lodging facilities expected for 2011 and 2012, this area is becoming an increasingly vibrant study environment for local and international students alike.

The building at Route de la Maladière 21 in Chavannes-près-Renens  is easily accessible by public transportation, underlining BSL’s commitment to the environment. As the sole future occupant of the building, BSL effectively doubles the size of its existing facilities, including additional spacious and modern classrooms, extended facilities for research, faculty, students and the administration as well as parking facilities.

“BSL has undergone significant changes in the past two years,” confirms BSL President Philippe du Pasquier. “The new building accommodates our need for growth and symbolizes an historical milestone in the evolution of BSL as a key player in Swiss business education.”

Constructed at the turn of the 20th century, BSL’s new building has housed the Swiss Graduate School of Public Administration (IDHEAP) since 1992. The site was the first major edifice constructed in Chavannes for use as a primary school in response to the village’s exponential population growth.