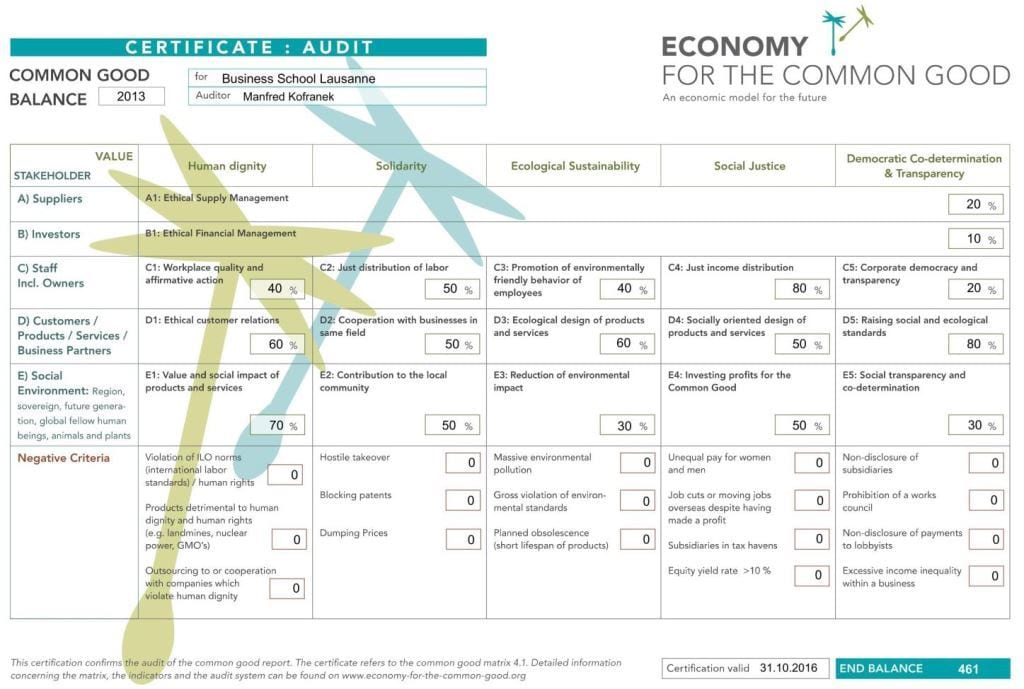 Business School Lausanne is the first school worldwide to implement the Economy for the Common Good (ECG) organizational matrix  as an assessment and reporting tool. BSL applied the ECG matrix to evaluate and measure its own sustainability efforts and contribution to society against a holistic and relevant framework. Following a comprehensive self-assessment conducted in 2013 and an year of process optimization, the school has now released its first official ECG Audit Report (download here). The report provides an overview of the outcomes of the evaluation process as well as a description of actions that were undertaken and recommendations for further improvements.

“We hope that we can provide some inspiration and motivation for others to also use the Economy for the Common Good matrix as a way to determine their contribution to society,” BSL’s Dean Dr. Katrin Muff commented on the report. She suggested that the matrix provided an outstanding tool for self-assessment and continuous development: “To us at BSL, this has proven a significant instrument to both identify blind spots and to engage our stakeholders to collaborate in the further transformation of our organization.”

BSL implemented the Common Good Matrix as an assessment and reporting tool complementing the existing financial reporting and balanced score-card. By using the guidelines set out by the Economy for the Common Good framework, the school was able to quantify and thus evaluate and start monitoring the most important societal values: human dignity, solidarity, sustainability, justice and democracy. BSL was formally audited by a representative of the ECG audit team in July 2014, based on Version 4.1 of the Guidelines for the Common Good Report with the purpose to evaluate its findings, progress and improvements in the above 5 areas of societal value generation during the year of 2013.

“While it was clearly not our objective to attempt to score as high a value as possible, we were most pleased with the assessment and the improvements the BSL community had managed to accomplish in the 2013 period,” said Dr. Muff. Most importantly, the audit confirmed that BSL’s contribution towards the Common Good has extended beyond its legal obligations. This was established by evaluating BSL through the ECG point system. The ECG point system is based on an ideal vision of exemplary companies receiving a maximum of 1000 points. Conventional companies would be scoring in the range of 0 and 100 points. A rating above zero means that a company provides a positive impact to the Common Good beyond the legal baseline.

At the end of 2012, BSL conducted an initial self-evaluation which resulted in a scorecard of 365 points. Following a 1-year internal student-led project, a second enhanced and improved self-evaluation was conducted in early 2013 after having identified and worked on four main so-called ‘’Blind Spots’’. These blind spots were enhanced through the implementation of 9 Green Team projects. As a result, the audited result, which was conducted in July 2014, established BSL with an improved total of 461 points.

The auditors thus accorded BSL the status of an “experienced organization” in terms of contributing value to society and the Common Good.

>> The official audit report is available for download here.